So as I was undertaking a paper crafting purge I found some knitting bits and bobs.

I purged the free booklets, I have taken them to my Mum for her to pass onto the Craft Club as there are a number of knitters there.

I then put somewhere in view (to irritate me!) some unfinished projects.  I mentioned a couple of them here in May 2012 in the hope that it would kick my butt...but it didn't work!  For some reason this time round it has! 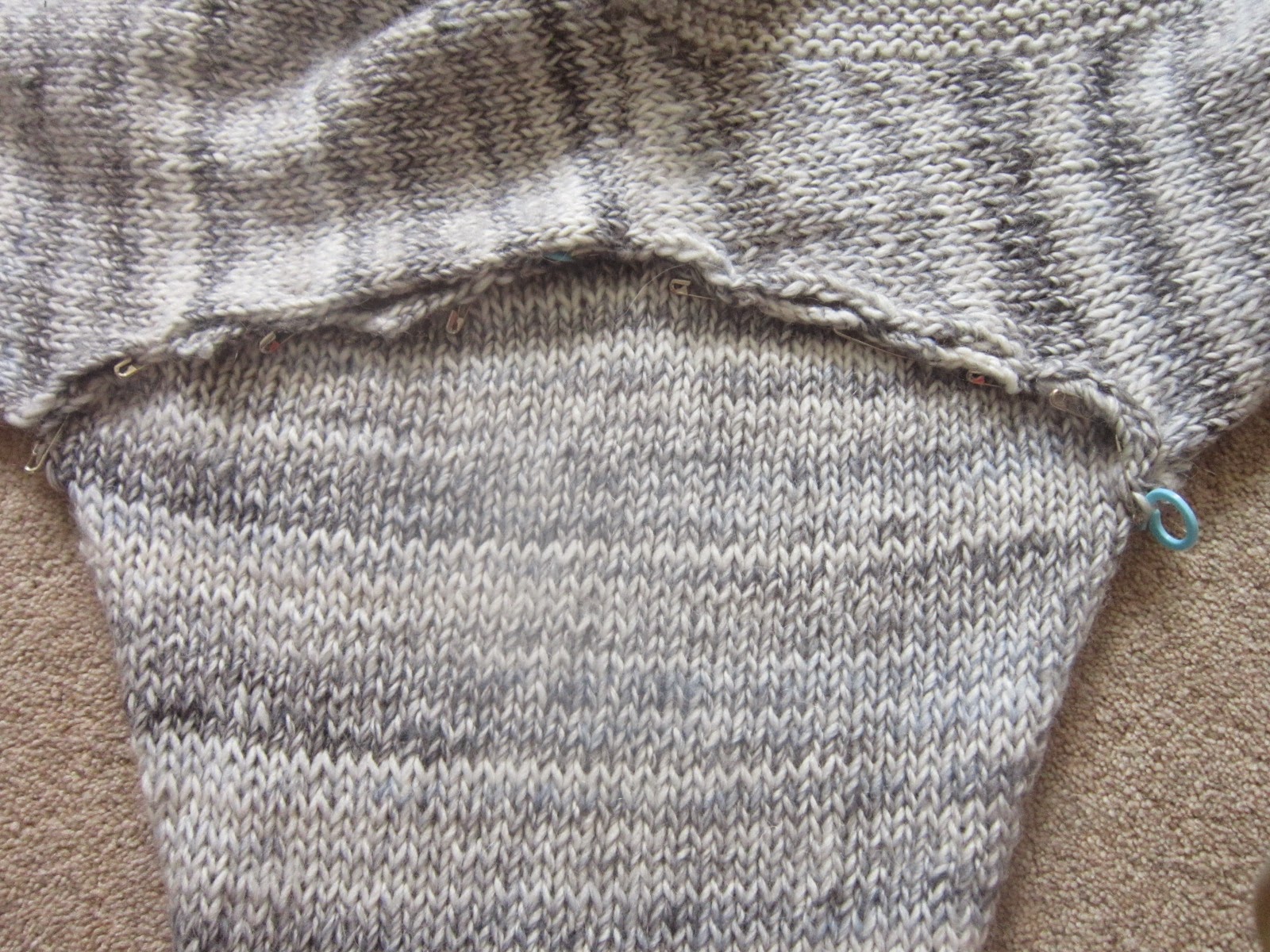 I did come back to it and finish the knitting part, which is the bit I enjoy despite being slow.  I hate sewing up!

There was a little jumper with no neck band and in pieces.  It was a project (of 2, one pink, one blue, knitted when pregnant, I finished the pink one as my Little Lady was born).  I was busy and it was irrelevant, so the blue one never made it over the finish line. 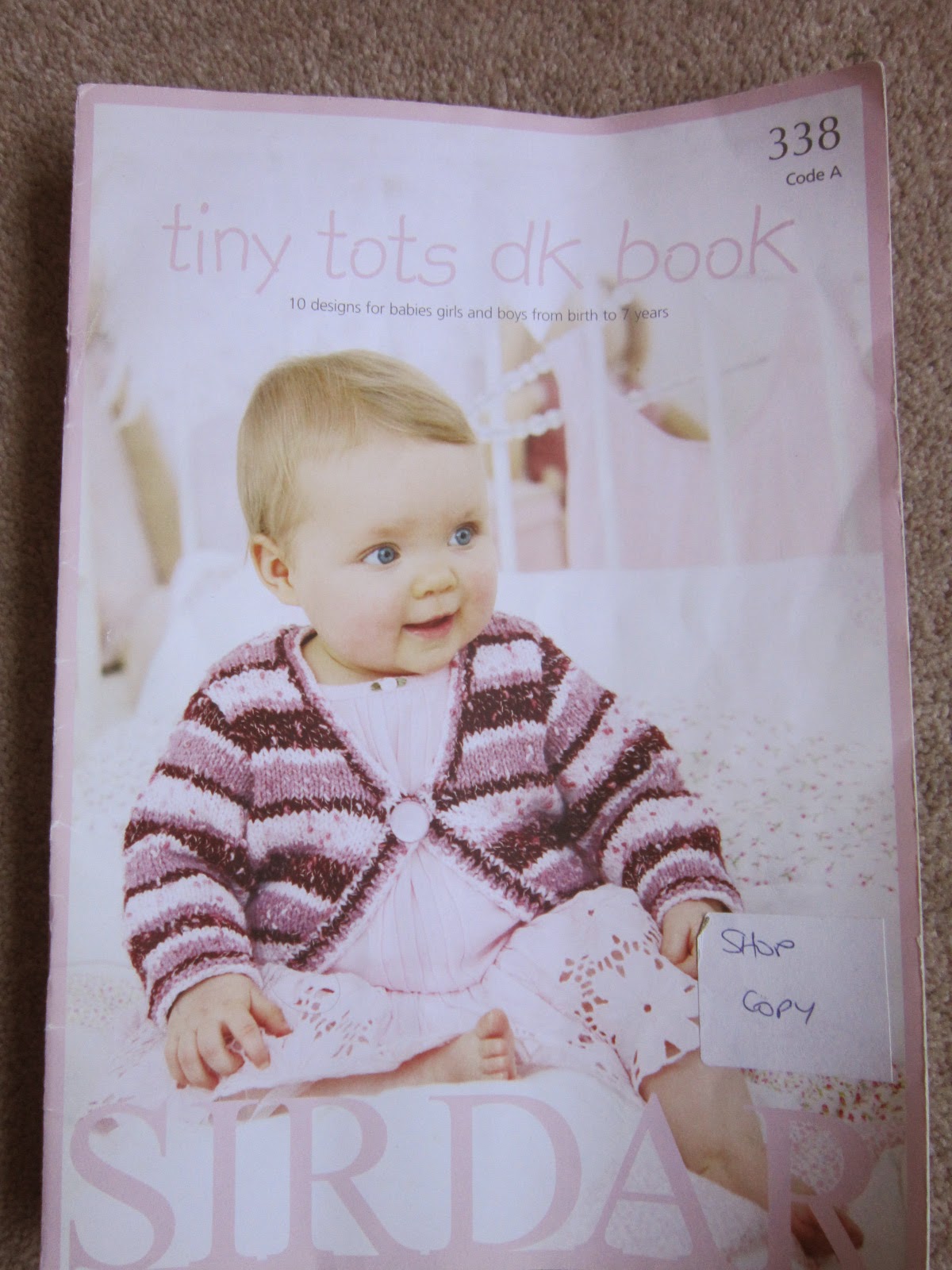 Little Lady had the one on the front cover in plain pale pink, the 'boy' one was the jumper on the right ...... 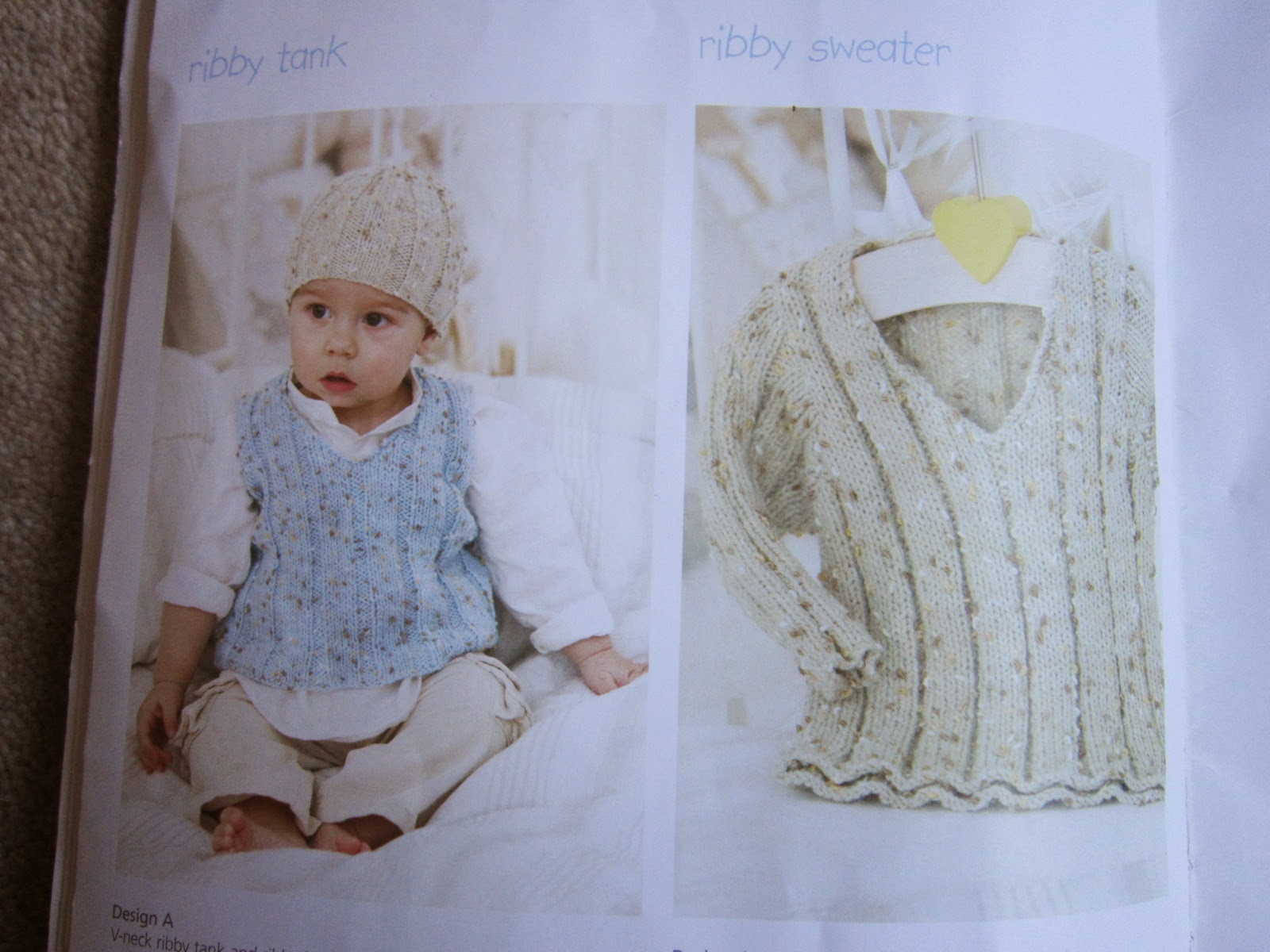 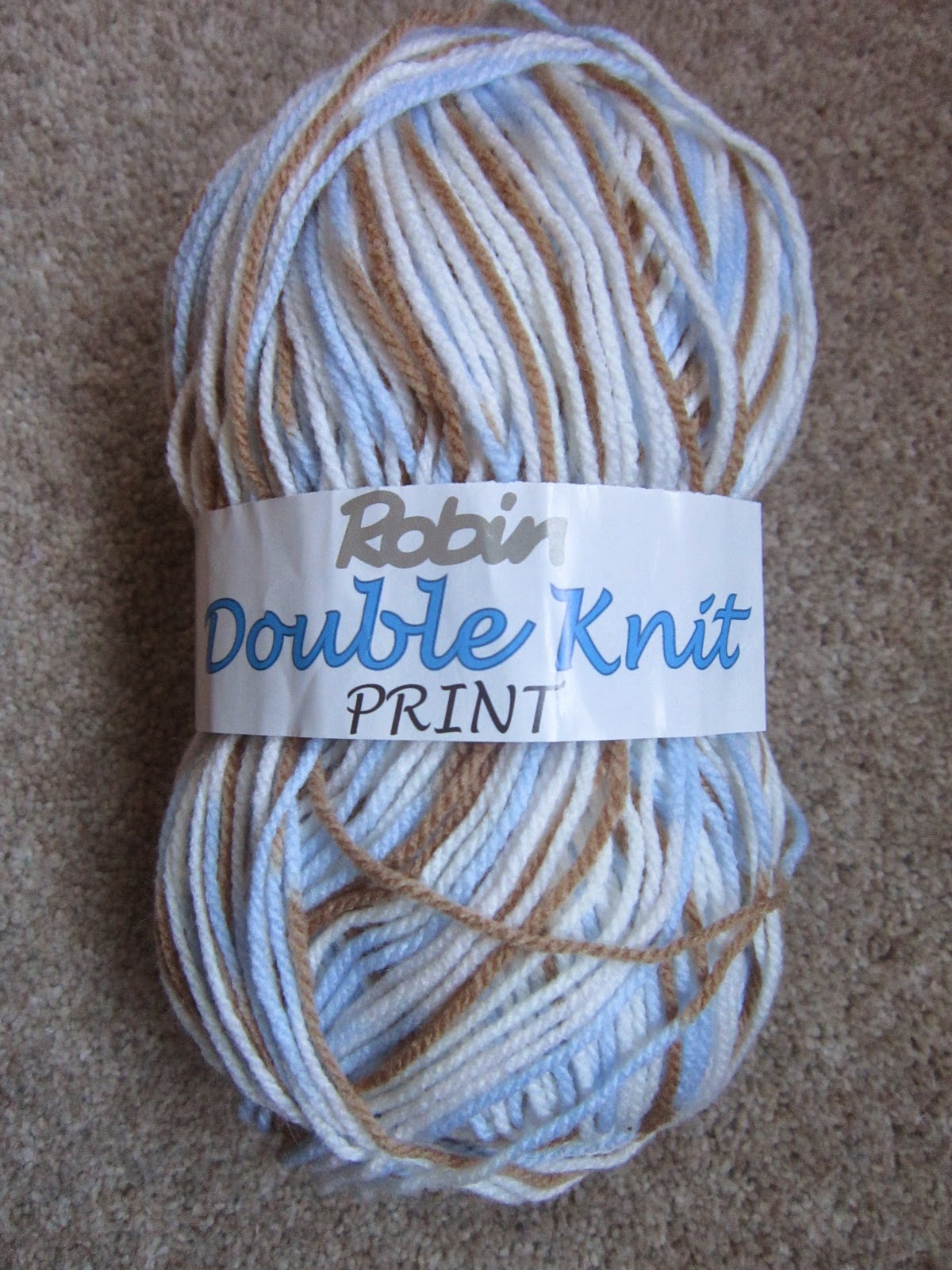 At some point I also knitted this waistcoat...... 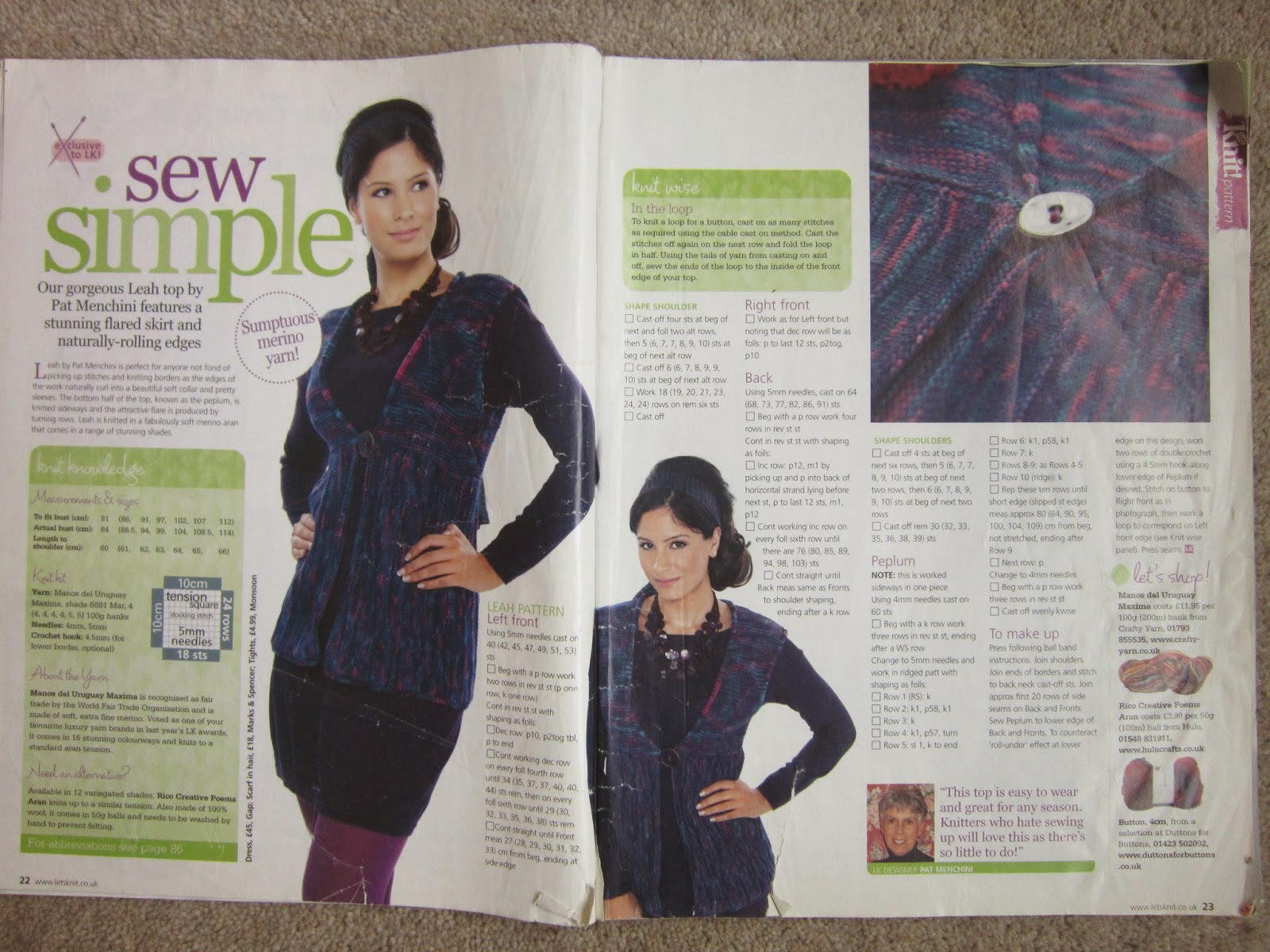 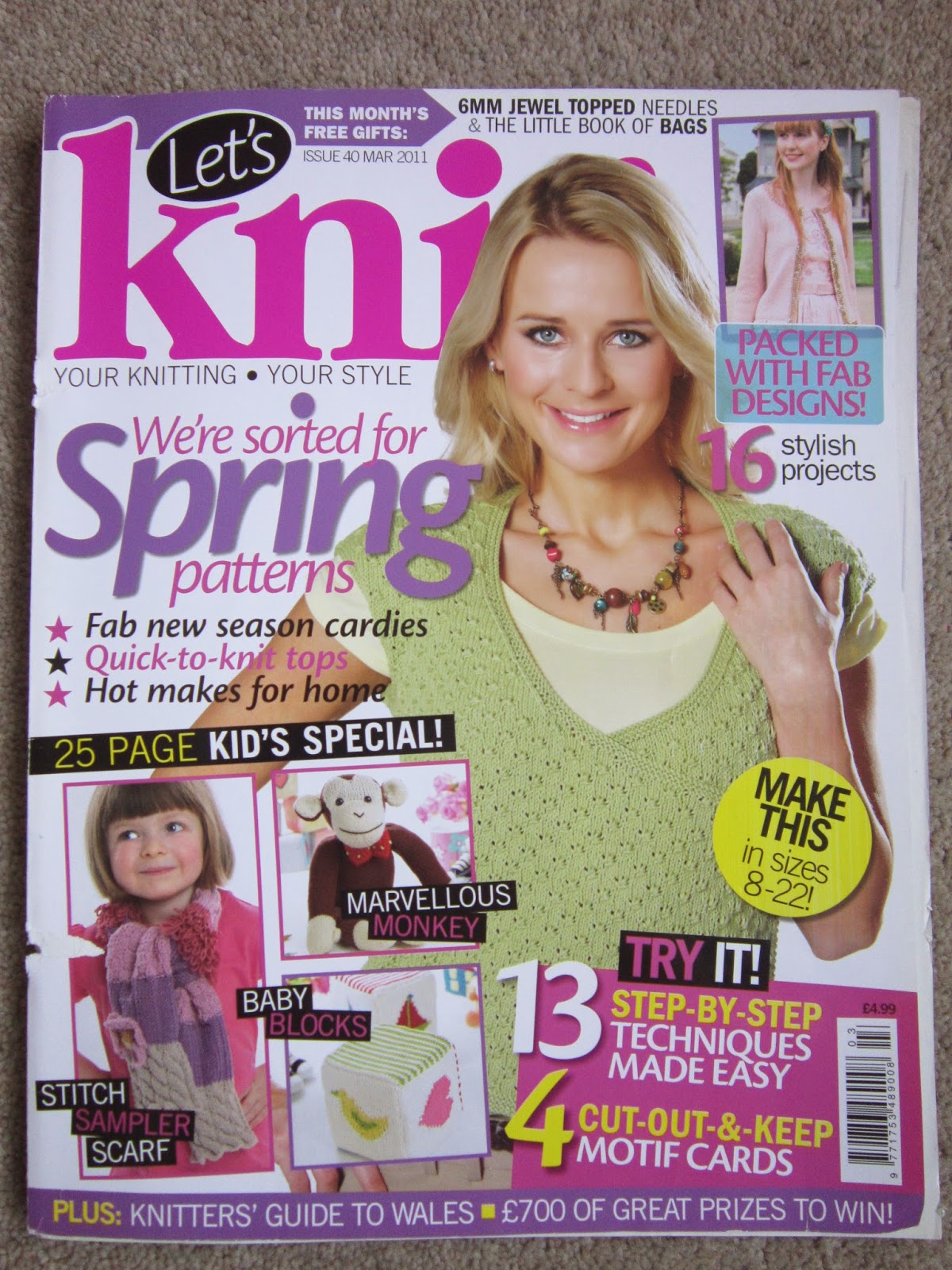 The peplum is knitted sideways and was a lovely project, I seem to remember that I finished this quite quickly (for me!)... 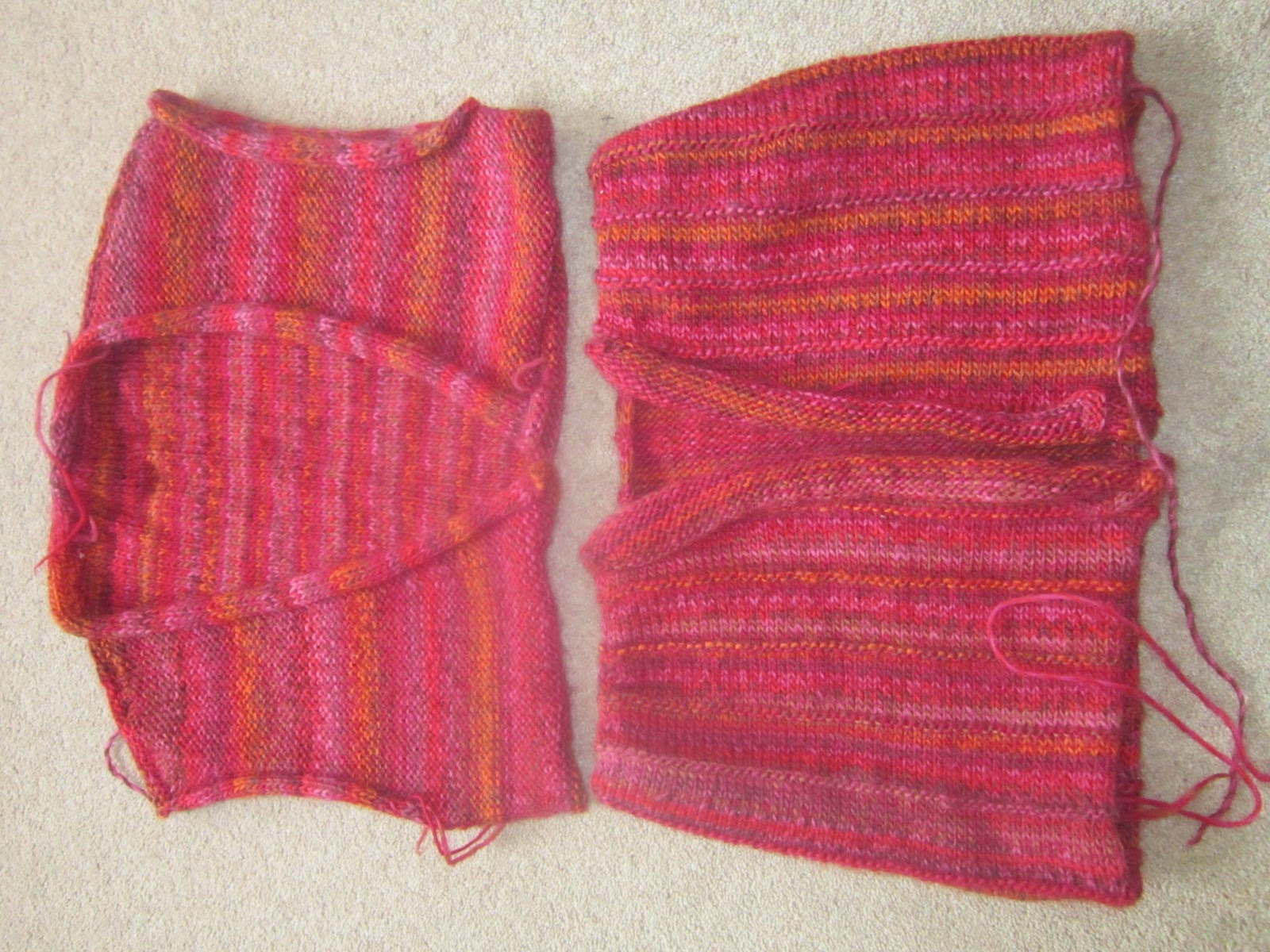 ..........but, predictable as ever, it wasn't sewn up despite appearing in this same post.

There is also a scarf mentioned here and only requiring 5 more pattern repeats to finish.

When I started writing this post about 2 weeks ago...it was just going to be a 'look what I've got to finish' type of effort....but something has happened and in the last 2 weeks I have argued with myself and persevered until this happened......TA-DAH!!!!! 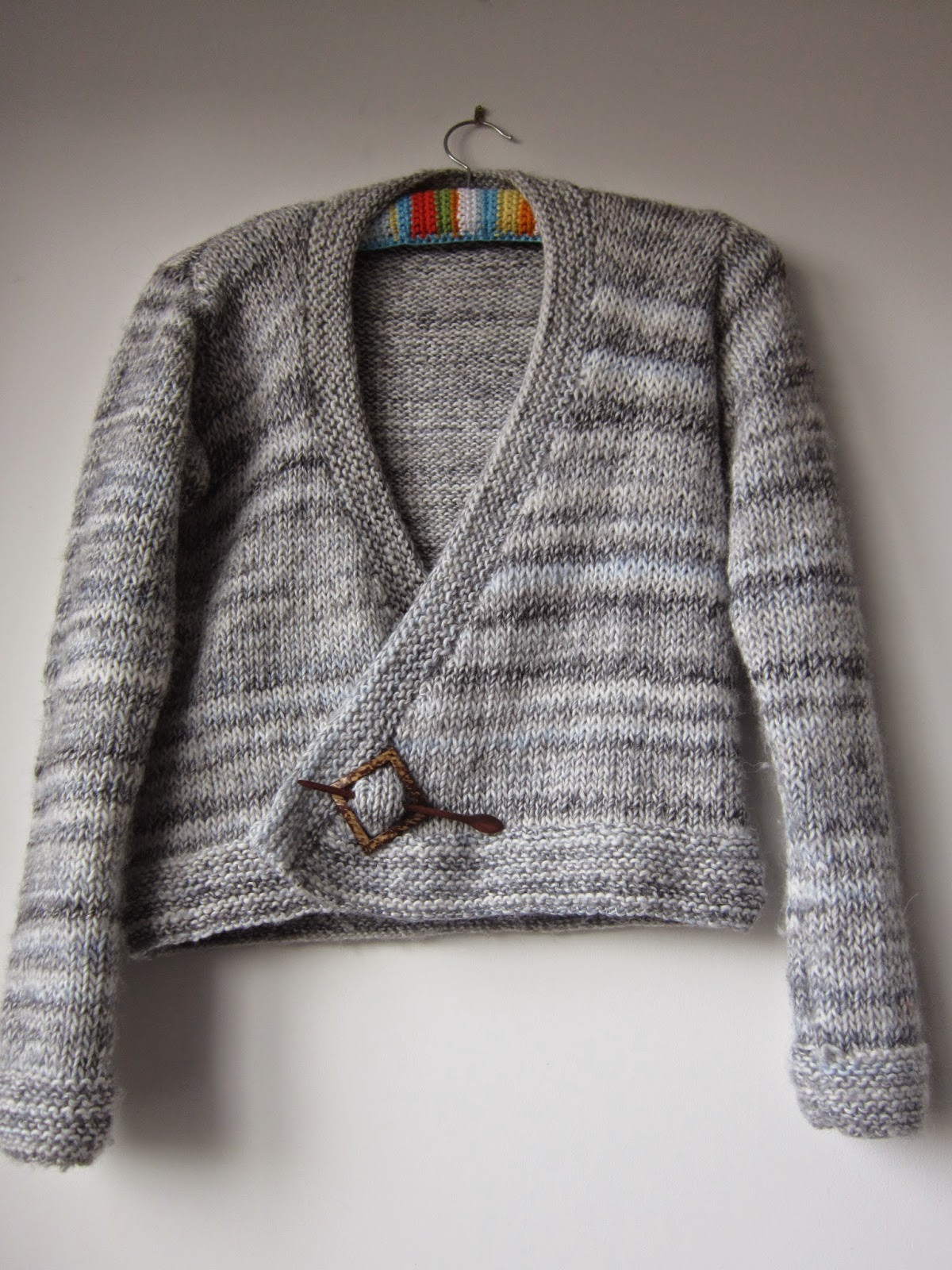 It is held together temporarily with a freebie from a magazine until I decide exactly what to use.

The baby boy jumper now has a neckline and is also accompanied by a hat... 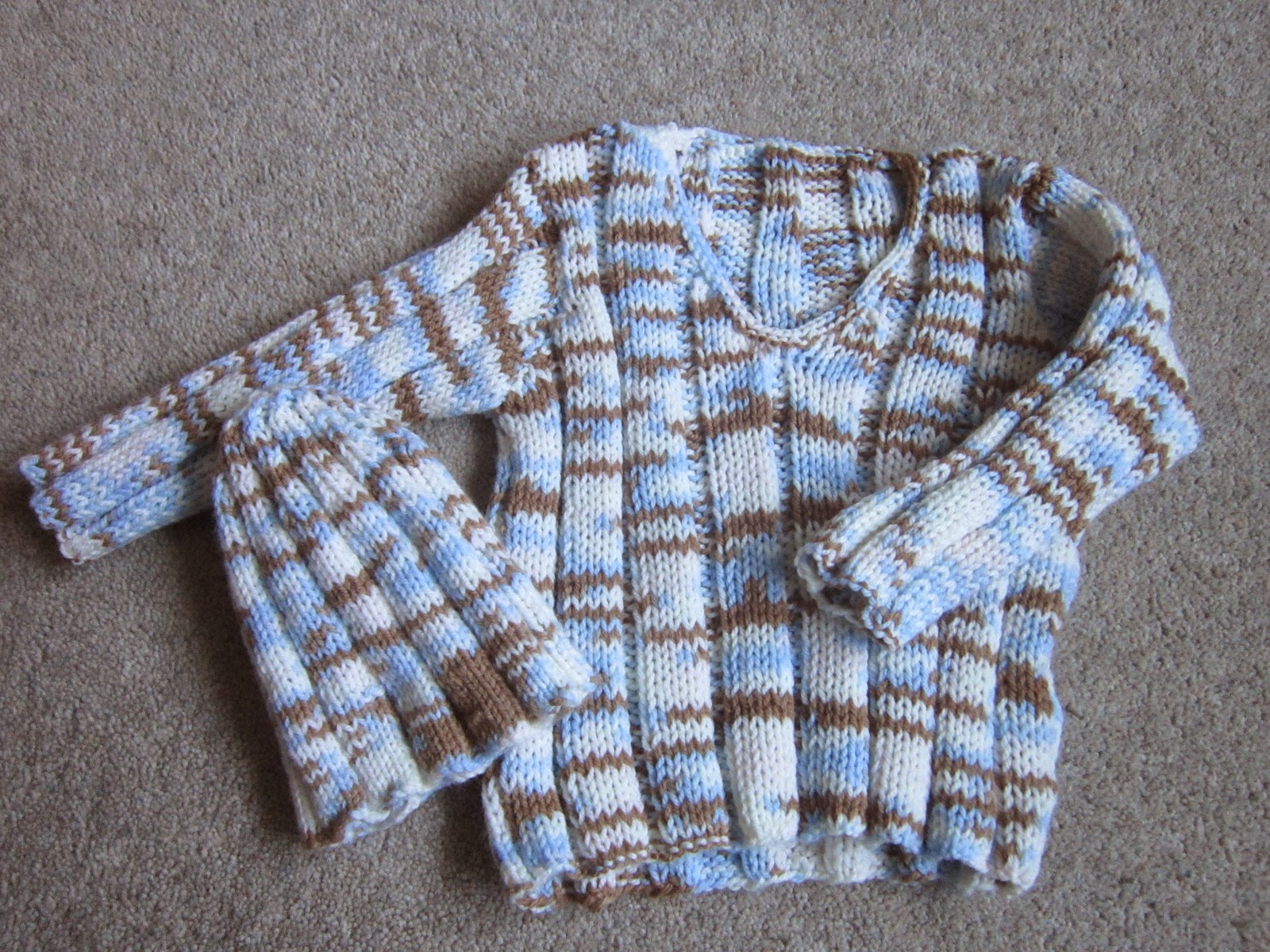 ........it is also destined for a new home with a friend who is expecting a little boy in early March. 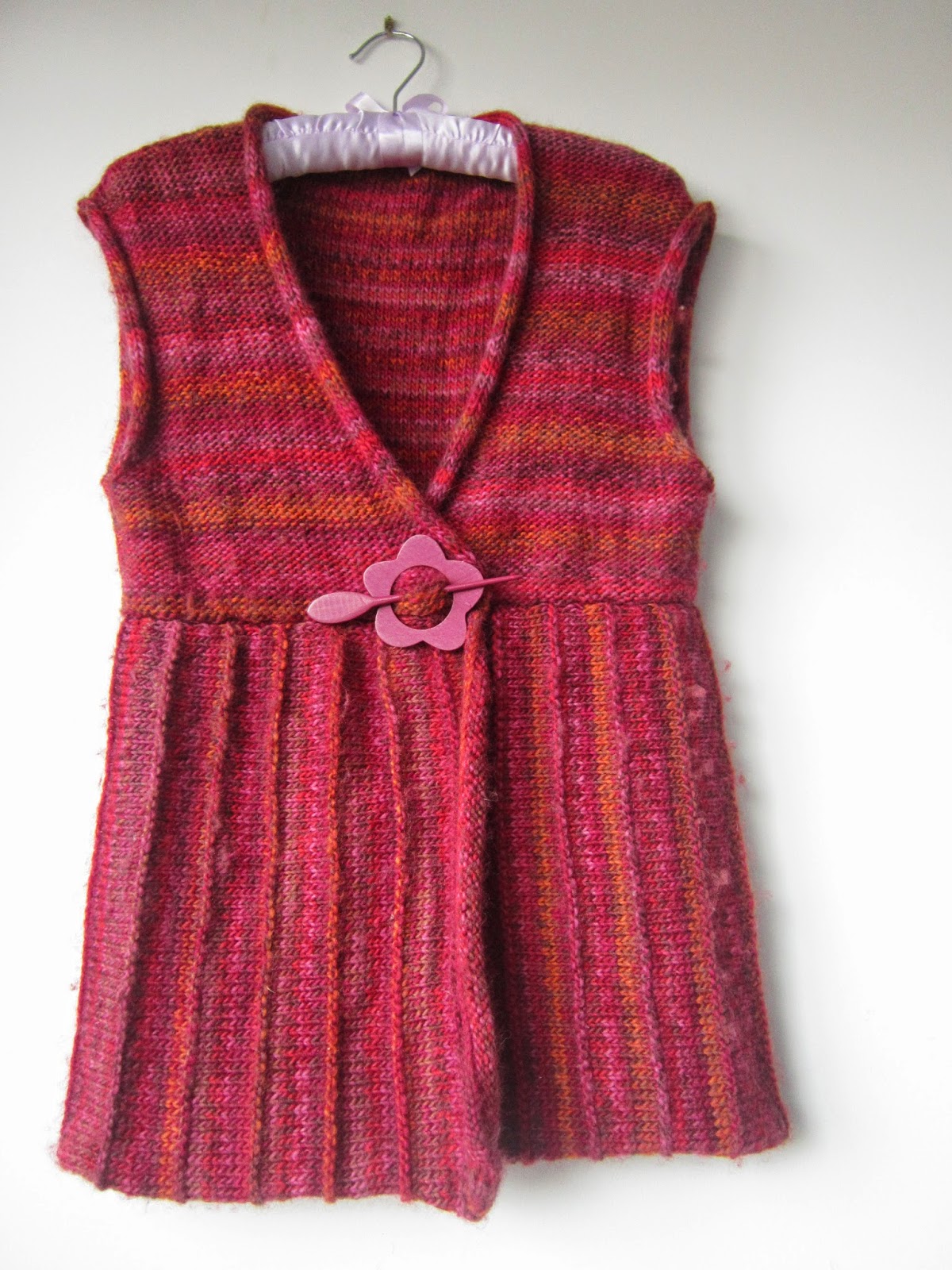 I'm not sure about the closure on this, but I'm thinking either a fancy hook and eye thing or some simple ribbon ties.  Any thoughts on that one?  Suggestions welcome.

Finally, the scarf. I have to say it was my first attempt at a lace pattern and although fairly successful, has got the odd mistake, which was too hard to rectify and so (unlike me!) I ignored it and carried on regardless because I wondered who would be looking that closely to notice holes in the wrong place! 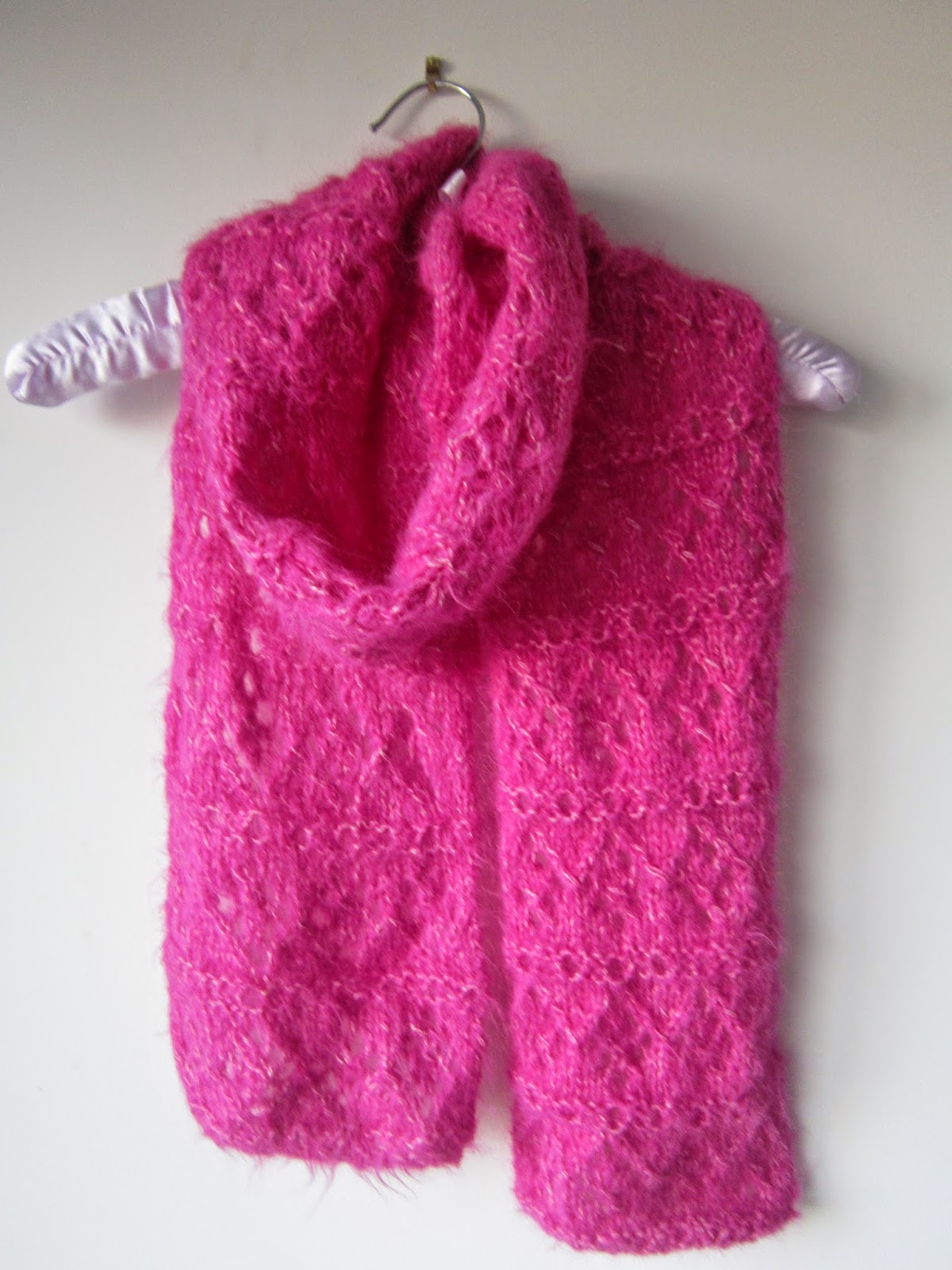 The spare yarn from 3 of these projects plus other sundry bits I had hanging around have gone to my aunt for her to knit up some dog coats for a rescue charity, again, I just needed to get rid of it so that it doesn't get stashed for eternity.  I sat and thought..... oh..I could crochet a blanket or hat......NO!!!! GET RID!!!

During my purge I also found a yarny 'hedgehog'!  It turned out to be a fluffy yarn that I bought, pre-crafting journey, about 12 years ago.  I must have felt the pull of crafting but as I was studying for my degree and with a young family, I can imagine the commitment to 'doing' was missing even though my heart clearly felt creative.  I used to sit at swimming and knit garter stitch on HUGE needles and simply made a rectangle to sew into a cushion....this post has pushed me to source a cushion insert for this and another project, so when they arrive, I'll finish them and share with you.

So there we are, almost there and feeling good.

I shall return soon with a cushion reveal or two and photographs as I get these projects finished (maybe you shouldn't hold your breath as the waistcoat has been getting finished since May 2012!)

That is the end of this knitting update, next I shall be moving on to a re-purposing project involving sequins!!

Until then, happy purging, stash-busting and ta-dah's in your world.
Love
Nora
xxxx

Thanks for dropping by, please don't leave without commenting as it's nice to know you were here x

Nora
...welcome, I'm thrilled you could join me. I am married and we have 5 children. We retired to a remote area in the North Pennines and spend our time crafting, gardening and having fun with our youngest daughter and only child still living at home. Please come and join me for some baking, crochet, sewing, knitting, gardening, upcycling, faith and family life; and to share our triumphs and disasters!!